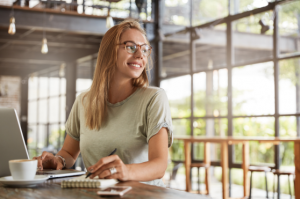 Ask a baby boomer what “working from home” means and you’re bound to get an inquisitive stare. That’s because the term was essentially non-existent up until recent years and those who are about to retire missed out on something groundbreaking. “Remote” work, as it’s also called in professional circles, is something that has been shown to boost morale, decrease turnover and it’s also on the rise. According to a 2017 exploration of the topic by The New York Times, more than 40 percent Americans worked from home at least occasionally. “That represents a four percentage point increase since 2012, a shift that meets the demands of many job seekers,” the Times states.

For freelancers who can work from home or on the road, the concept of an “office” is flexible. For those looking for such freedom, we’re here to explore the industry of remote work and show how sitting at the same desk for 40 hours every week will eventually become a thing of the past. Freelancers, by nature, are disciplined professionals. They know that as their own boss, they are responsible for finding gigs, getting work done on time and lining up the next project by seeking out those advertising short-term contracts.

For those who can balance these responsibilities, working remotely is the best of both worlds. Here’s why:

Remote work owes a lot to the technology that allows employees to take work technology home or on the road and plug in to complete important tasks. QuiGig, a freelance services platform, will launch later this year and give users the opportunity to find and advertise short-term contract-based work. The app will allow users to find work that’s relevant to them and use utility tokens called “Quigs” to interact with other app users. If you’re looking to join the millions of other freelancers who earn income from home or on the road – and not at the same office five days a week – QuiGig may hold the answer to your current employment concerns.

Rewarding Profession AND $19 An Hour? It’s Time To Tune Into Your Freelance... Meet Roger, Our QuiChoice Home Inspector
Scroll to top