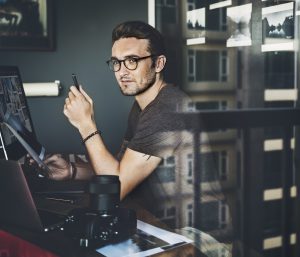 Moonlighting as a freelancer was once a way to make some money on the side. Sure, you’d have to sacrifice free time outside of your primary place of work, but it was nice to have that additional income. That is no longer the case. Nearly 58 million Americans — out of our total workforce of about 160 million — completed some sort of freelance work in 2017 and here’s the kicker: The average hourly pay is only a few dollars short of what full-time workers are making at their office jobs.

According to a late 2017 assessment by Forbes magazine of the freelance gig-based economy, freelancers on average are earning about $19 an hour. The U.S. Bureau of Labor Statistics further states that workers who hold the typical 40-hour-per-week job are making a little more than $26 an hour. In the eyes of QuiGig, a freelance service platform that will officially launch later this year, this miniscule gap means the gig economy is growing its worth, reputation and reach.

“Many of the freelancers run their businesses full time, with respondents averaging 30 to 50 hours a week of work,” Forbes states, citing a survey by payment platform Payoneer. “The majority of the freelancers are highly educated. Fifty-four percent of freelancers have a bachelor’s degree — and in the Ukraine, 50 percent have a master’s degree or Ph.D.” The Forbes article also notes that the current $19 hourly wage represents a slight decrease from $21 an hour, which was recorded for the 2014-15 fiscal year. A BusinessNewsDaily.com article from that period says that freelancers were actually taking more money home than the 9-to-5 crowd. So, if you’re looking to earn about $20 an hour, it’s time to look within and take stock of your skills. After that, it’s time to turn to QuiGig to pair your professional know-how with customers offering relevant work.

First, an appeal to freelancers and those considering this path: It’s time. Everyone from photographers to plumbers and copy editors to house cleaners has been getting in on the action. If you’ve got a skill that other people could use, you can freelance it. It’s that simple, it clearly pays well and you can be your own boss by only signing onto short-term contract-based work that you want to do. So why should you join the QuiGig community to find freelance work? First of all, you’ll be in good company. According to the Payoneer survey, two-thirds of the 21,000 freelancers across 170 countries who were contacted said they use online services to locate gigs. In the next few years, QuiGig expects to operate millions of job pages across thousands of cities so freelancers can find local work – if they so desire – or connect with international clients offering remote opportunities. Best of all, QuiGig’s proprietary “Quig” utility token will permit in-app interactions while filtering out those looking to waste your valuable time.

Want To Be Your Own Boss And Work Remotely Every Day? Of Course, So Here’s...
Scroll to top